An Evening With Ken Chenault

An Evening With Ken Chenault

An Evening With Ken Chenault will be a live-to-tape, one-on-one interview with former American Express CEO Ken Chenault conducted by sportscaster James Brown at New York City’s The New York Times Center. Taking place on Saturday, November 3, 2018, the program will pay tribute to Chenault’s extraordinary life and career. As Brown guides Chenault through his early professional years as a lawyer and consultant into his nearly forty year career at American Express, the audience will hear stories of ambition and perseverance.

An Evening With Ken Chenault will not only spotlight one of the nation’s most accomplished business and civic leaders. It also will contribute to a developing conversation on the history of African Americans in business, a topic too long ignored. 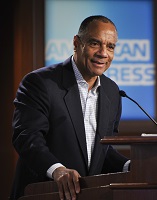 Kenneth I. Chenault is Chairman and a Managing Director of the venture capital firm, General Catalyst.

Prior to joining General Catalyst earlier this year, Ken was Chairman and Chief Executive Officer of American Express Company, a position he held from 2001 to 2018. Under his leadership, American Express built on of the world's largest customer loyalty programs - Membership Rewards - and earned global recognition as a leader in customer service.

Ken is recognized as one of the business world's experts on leadership and brand management. He has been honored by multiple publications including Fortune Magazine, which named him as one of the World's 50 Greatest Leaders in its inaugural list in 2014.

Ken serves on the boards of Airbnb, Facebook, IBM, The Procter & Gamble Company, the Harvard Corporation and numerous nonprofit organizations, including the Smithsonian Institution's Advisory Council for the National Museum of African American History and Culture, the National September 11 Memorial & Museum, and Bloomberg Philanthropies. He also serves on the board of trustees for NYU Langone Health.

He and his wife, Kathryn, live in New York City, and they have two sons. 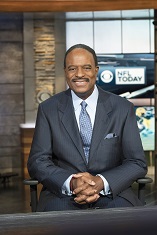 Brown is the current host of The NFL Today on CBS, host of Inside The NFL on Showtime and host of The James Brown Show, a nationally syndicated sports and entertainment broadcast series. A three-time Emmy Award-winning network broadcaster, Brown has hosted the Super Bowl eight times including Super Bowl 50 on CBS. In 2010, SI.com named Brown the Best Studio Host of the Decade. Brown is also a Special Correspondent for CBS News and contributes to various programs such as 60 Minutes and CBS This Morning.

Among his previous broadcasting roles were host of Thursday Night Football on CBS and The NFL Network, co-hosting of Fox NFL Sunday, working as a correspondent for Real Sports with Bryant Gumbel on HBO, and hosting a nationally syndicated radio show on Sporting News Radio. In 2009, Brown wrote his first book and memoir, Role of a Lifetime: Reflections on Faith, Family and Significant Living. He is a founding partner of the Major League Baseball’s Washington Nationals. Brown is a partner with FullCircle Intermedia, a company that assists athletes and entertainers in developing their brand to ensure long-term success.

An ordained minister, Brown is no stranger to charitable works. He works on behalf of DC College Access Program (DCCAP); The Ron & Joy Paul Kidney Center at George Washington University; and The Salvation Army. Among numerous honors, Brown most recently received the 2016 Pete Rozelle Award by the Pro Football Hall of Fame, which recognizes "longtime exceptional contributions to radio and television in professional football," and The Uncommon Award from Tony Dungy for his “uncommon leadership through character and faith.”

Brown is a Washington, D.C. native and a 1973 graduate of Harvard University, where he was a three-time All-Ivy selection in basketball and captained the team as a senior. He resides today in the Washington metropolitan area with his wife Dorothy. His daughter Katrina and her husband John have blessed them with three granddaughters and one grandson.