An Evening With Debra Lee explores the interesting life and career of one of the nation’s top women in media and entertainment.  She began her career as a typical young corporate lawyer at Black Entertainment Television (BET) as in-house counsel.  Her career took off from there.  Ms. Lee worked alongside founder of BET, Bob Johnson, playing an instrumental role in the company’s growth.  At the end of the historic $3 billion sale of BET to Viacom, Lee became the CEO of BET.  The network began to launch original programming and expanded BET’s reach beyond the music videos as they launched a Black woman-centered network, Centric. 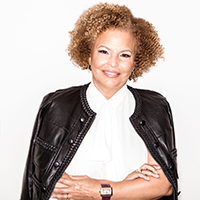 With a trailblazing career spanning over three decades, DEBRA L. LEE is one of the most influential female voices in the entertainment industry. Lee served as the Chairman & CEO of BET Networks. During her tenure, Lee helmed BET’s reinvigorated approach to corporate philanthropy & authentic programming that led to hits such as The New Edition Story, Being Mary Jane, The BET Awards, Black Girls Rock!, BET Honors and many more. Prior to her being named Chairman and CEO, Lee was Presi­dent and COO of BET Networks for almost 10 years having first joined the network as BET as Vice President and General Counsel in 1986. Before that, she served more than five years as an attorney with the Washington, D.C. law firm of Steptoe & Johnson. Prior to that, she served as a law clerk to the late Honorable Barrington Parker of the United States District Court for the District of Columbia. In 2011, Debra was appointed by President Obama to the White House Management Advisory Board. Lee also currently sits on the Board of Directors for corporations like Twitter and Marriot. Named one of The Hollywood Reporter’s 100 Most Powerful Women in Entertainment and Billboard’s Power 100, Lee’s achievements in her 30+ year career in the industry have earned her numerous ac­colades from across the cable industry, as well as one of this country’s most respected business executives. Lee was honored with the Distinguished Leadership Vanguard Award by the National Cable & Telecommunications Association and was inducted into the Broadcasting & Cable Hall of Fame. Lee earned her J. D. degree from Harvard Law School, while simultaneously earning a master’s degree in public policy from the John F. Kennedy School of Government. She graduated from Brown University with a bachelor’s degree in political science with an emphasis in Asian politics.

DEBORAH ROBERTS is an award winning ABC News Correspondent for 20/20, Nightline, Good Morning America, and ABC World News To­night with David Muir. A media veteran, Roberts is a highly respected journalist who has traveled the world in her reporting and has also served as substitute anchor for Good Morning America, World News Weekend and 20/20, as well as a co-host on The View. Roberts’ long form reports on 20/20 have consistently produced extraordinary narratives such as an intimate profile of first lady Michelle Obama, first daughter Ivanka Trump and an in depth investigation into abuse within the Amish community. She has reported from Africa on children orphaned by the HIV/AIDS crisis and was part of the historic coverage of the inauguration of President Barack Obama. Rob­erts has been awarded multiple Emmy awards for her international and national coverage of world events, including her poignant reporting on an Ethiopian American woman’s emo­tional journey back to her African village to discover her long lost mother. Roberts is author of “Been There, Done That: Family Wisdom For Modern Times,” a book written with her husband, Al Roker. She makes her home in Manhattan with her husband and two children.