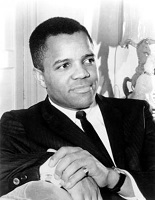 Berry Gordy founded and presided over the musical empire known as Motown. As a young black man working in often inhospitable times, Gordy endeavored to reach across the racial divide with music that could touch all people, regardless of the color of their skin. Under his leadership, Motown became a model of black capitalism, pride and self-expression and a repository for some of the greatest talent ever assembled at one company. The list of artists who were discovered and thrived at Motown includes The Supremes; Junior Walker & the All-Stars; The Temptations; The Four Tops; The Miracles; Marvin Gaye; Stevie Wonder; The Jackson 5; and Martha and the Vandellas. Beyond the artists, Motown’s staff songwriting and production teams and in-house musicians contributed immeasurably to the Motown sound.

The idea of a self-contained operation exuding soul from its every pore was all part of Gordy’s grand design. The rags to riches story began in Detroit’s inner city where Gordy, born in 1929 as the son of a plastering contractor, dreamed of making his mark on the world. Stints in the army and as a boxer and record store manager preceded his entree into the creative and entrepreneurial side of the music business. In the mid-1950s, Gordy began writing songs for local R&B acts and quickly acquired a local reputation as a songwriter, producer and hustler. His first break came in 1957, when Brunswick Records bought a song of his called “"Reet Petite"” for Jackie Wilson. In 1959, Gordy ventured into independent production with singer Marv Johnson, enjoying a few modest hits, including “"Come to Me."” In 1960, Gordy leased another hit single, “"Money"” by Barrett Strong, to Anna Records, a label owned by his sister. Then he decided to launch his own company, Tammie Records, which was changed to Tamla and eventually joined by the Gordy, Soul and Motown imprints. All of these labels were overseen from a Detroit house at 2648 West Grand Boulevard that Gordy dubbed Hitsville U.S.A.

The first hit of any size for the fledgling company belonged to The Miracles, a vocal group led by Smokey Robinson. “"Way Over There,"” released on Tamla in 1960, sold a respectable sixty thousand copies. Its followup, “"Shop Around,"” reached Number 2 on the pop charts and launched Motown into the national market. Overseeing the whole operation from its founding in 1959 to its sale in 1988 was Berry, who ensured that Motown’s stable of singers, songwriters, producers and musicians took the concept of simple, catchy pop songs to a whole new level of sophistication and, thanks to the music’s roots in gospel and blues, visceral intensity. At Motown, notions of formula were transformed into works of art.