The History of Blacks in Education: From HBCUs to PWIs

The History of Blacks in Education:
HBCUs to PWIs

Despite obstacles, African Americans have been pioneers in education at both historically black colleges and universities (HBCUs) and predominately white institutions (PWIs). The History of Blacks in Education: HBCUs to PWIs explores this rich history that dates back to the 1800s. CNN’s Suzanne Malveaux leads this discussion that begins with a commentary by distinguished professor of history and education V.P. Franklin. The panel explores the lives and careers of two higher education pioneers: Johnnetta B. Cole, the first black female president of Spelman College and the only person to serve as president of the only two historically Black colleges for women; and President of HBCU Prairie View University Ruth Simmons, the first black president of Smith College and the 18th president of Brown University, where she established the Committee on Slavery and Justice. The discussion ends with a Q&A session with questions from The HistoryMakers EducationMakers Advisory Committee. Join us for a thought provoking discussion, important history lesson and suggested frameworks for future success of African American students, educators and administrators.

This 90-minute program is scheduled to stream on YouTube and Facebook Live at 12:00 noon EST on Sunday, December 6, 2020 as the sixth installment of The HistoryMakers 20@2020: 20 Days and 20 Nights Convening and Celebration. 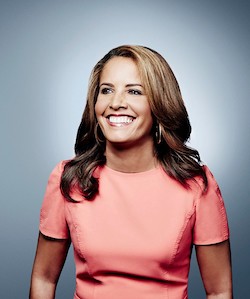 Malveaux also covered the White House for more than 10 years as a White House correspondent--covering Presidents Bill Clinton, George W. Bush, and Barack Obama traveling to Europe, Africa, The Balkans, Latin America, Southeast Asia, Australia and the Middle East. She has interviewed all 5 living Presidents, and several First Ladies. Malveaux also made news when she interviewed Donald Trump in April 2011, challenging him on his false Obama birther narrative, as he contemplated a Presidential run.

In March of 2012, Malveaux returned to Rwanda---the former civil war torn African nation she had covered 14 years ago with then President Clinton, and updated the reconciliation efforts. Later in October, she returned to South Africa where she interviewed the family of Nelson Mandela and covered Soweto "36 years out of the student uprising". Years earlier, in 1998, she covered President Bill Clinton's tour of Mandela's prison cell at Robben Island, with the Civil Rights leader. 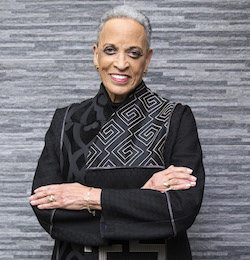 Johnnetta B. Cole is an anthropologist, educator, and museum director. Cole’s educational love affair with cultural anthropology and her passion for women's studies endeared her to Spelman College in Atlanta, the nation's oldest, private, liberal arts college for black women. She became its first African-American woman president in 1987, a post, which she relinquished in 1997. She also was as Bennett College for Women’s president from 2002-2007. Since 2009, Cole has served as the Director of the Smithsonian Institution’s National Museum of African Art. Cole's entire career thus far spans significant scholarship and distinguished administration. She rose through the ranks from Assistant Professor to Professor in the Departments of Anthropology and Afro-American Studies at the University of Massachusetts, has been a professor of anthropology and director of the Latin American and Caribbean Studies Program at Hunter College, and served as Associate Provost for Undergraduate Education at the University of Massachusetts. She also held visiting professor appointments at Washington State University, UCLA, Oberlin and Williams. 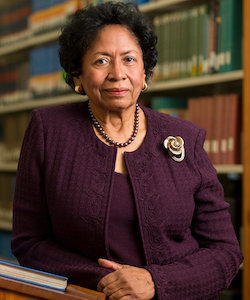 Ruth J. Simmons serves as President of Prairie View A&M University. She was President of Brown University from 2001-2012. Under her leadership, Brown made significant strides in improving its standing as one of the world’s finest research universities. A French professor before entering university administration, President Simmons held an appointment as a Professor of Comparative Literature and Africana Studies at Brown. After completing her Ph.D. in Romance Languages and Literatures at Harvard, she served in various faculty and administrative roles at the University of Southern California, Princeton University, and Spelman College before becoming president of Smith College, the largest women’s college in the United States. At Smith, she launched a number of important academic initiatives, including an engineering program, the first at an American women’s college. 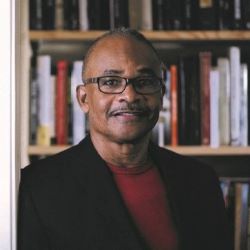 V.P Franklin, Ph.D., holds a University of California President's Chair and is a Distinguished Professor of History and Education. He is also the Editor of The Journal of African American History. Dr. Franklin has published over fifty scholarly articles on African American history and education and is the author of The Education of Black Philadelphia: The Social and Educational History of a Minority Community, 1900-1950 (1979), Black Self-Determination: A Cultural History of African American Resistance (1984, 1992) , Living Our Stories, Telling Our Truths: Autobiography and the Making of the African American Intellectual Tradition (1996), and Martin Luther King, Jr.: A Biography (1998). Professor Franklin teaches courses on the history of the Civil Rights-Black Power movements, U.S. education history, and twentieth century U.S. history. He is currently working on a study of transnational educational programs that went from the United States to Africa in the twentieth century.