The Crisis of Black Archives

The nation’s largest digital archive of African American video and oral history, The HistoryMakers warns that the United States sits at a critically important crossroads where a massive digitization project is needed to preserve, protect and make accessible the personal collections of its HistoryMakers who represent a wide variety of historical figures, organizations, and movements for the 20th century, or risk it being lost forever. The theme of the 20@2020 Convening is Preserving 20th Century African American Collections with 21st Century Solutions. Now as many of the African American leaders of the 20th century pass away without properly securing their legacy, we risk losing their irreplaceable records. Only through major financial investment and substantive institutional partnerships can the rapidly-disappearing historical records be properly preserved. In The Crisis of Black Archives, The HistoryMakers presents evidence on the overwhelming lack of a historical record for many African Americans with noted accomplishments. Led by Founder & President of The HistoryMakers Julieanna L. Richardson, former directors of the Schomburg Center for Research in Black Culture, Howard Dodson (1984–2011) and Khalil G. Muhammad (2011–2016) will discuss the challenges faced by repositories of primarily African American materials and identify the steps necessary for a path forward.

This 90-minute program is scheduled to stream on YouTube and Facebook Live at 12:00 noon EST on Friday, December 18, 2020 as the eighteenth installment of The HistoryMakers 20@2020: 20 Days and 20 Nights Convening and Celebration. 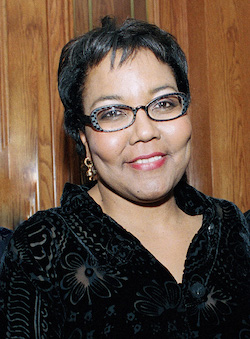 As founder of The HistoryMakers, Julieanna L. Richardson created a unique path to founding and heading up the largest national collection effort of African American video oral histories on record since the WPA Slave Narratives. Richardson graduated from Brandeis University in 1976 with her B.A. degree in Theatre Arts and American Studies. She received her J.D. degree in 1980 from Harvard Law School and began her career as a corporate lawyer at the law firm of Jenner & Block prior to serving in the early 1980s as the Cable Administrator for the City of Chicago’s Office of Cable Communications. The recipient of numerous honors and awards, Richardson has received three honorary doctorates of humane letters – from Howard University, Dominican University, and her alma mater, Brandeis University, where she served as the 65th Commencement speaker in 2016. She was awarded the 2014 Legacy Award from Black Enterprise Magazine, and was profiled in 2014’s American Masters: The Boomer List, a PBS documentary and exhibition at the Newseum in Washington, D.C. Richardson is committed to preserving and sharing this history and is leaving a unique and lasting legacy for generations to come. 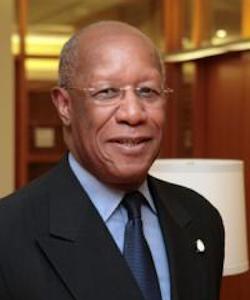 Historian and lecturer Howard Dodson was born June 1, 1939, in Chester, Pennsylvania. After completing high school in 1957, he attended West Chester State College, where he studied social studies and English, with an emphasis on secondary education. Graduating in 1961, he went on to Villanova University where he earned an M.A. in U.S. history and political science in 1963. Currently, Dodson is a Ph.D. candidate at the University of California, Berkeley.
Dodson has been active throughout his life in a number of projects. He was part of the Black Theology Project Conference held in Cuba, which brought Fidel Castro into the religious community for the first time in decades. He has produced a number of exhibitions and festivals celebrating black history and African American life. Dodson is also the author of several books and articles and the recipient of numerous awards, including being named to the President's Commission on the National Museum of African American History and Culture and the Malcolm X Museum Award. He serves on the board of directors of the Apollo Theater Foundation and the UNESCO Slave Route Project, among many others. 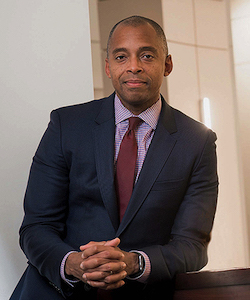 Khalil Gibran Muhammad is professor of History, Race and Public Policy at Harvard Kennedy School and the Suzanne Young Murray Professor at the Radcliffe Institute for Advanced Studies. He is the former Director of the Schomburg Center for Research in Black Culture, a division of the New York Public Library and the world’s leading library and archive of global black history. Before leading the Schomburg Center, Khalil was an Associate Professor at Indiana University.

Khalil’s scholarship examines the broad intersections of race, democracy, inequality and criminal justice in modern U.S. history. He is co-editor of “Constructing the Carceral State,” a special issue of the Journal of American History (June 2015), and a contributor to a 2014 National Research Council study, The Growth of Incarceration in the United States: Exploring Causes and Consequences, as well as the author of The Condemnation of Blackness: Race, Crime, and the Making of Modern Urban America (Harvard), which won the 2011 John Hope Franklin Best Book award in American Studies.